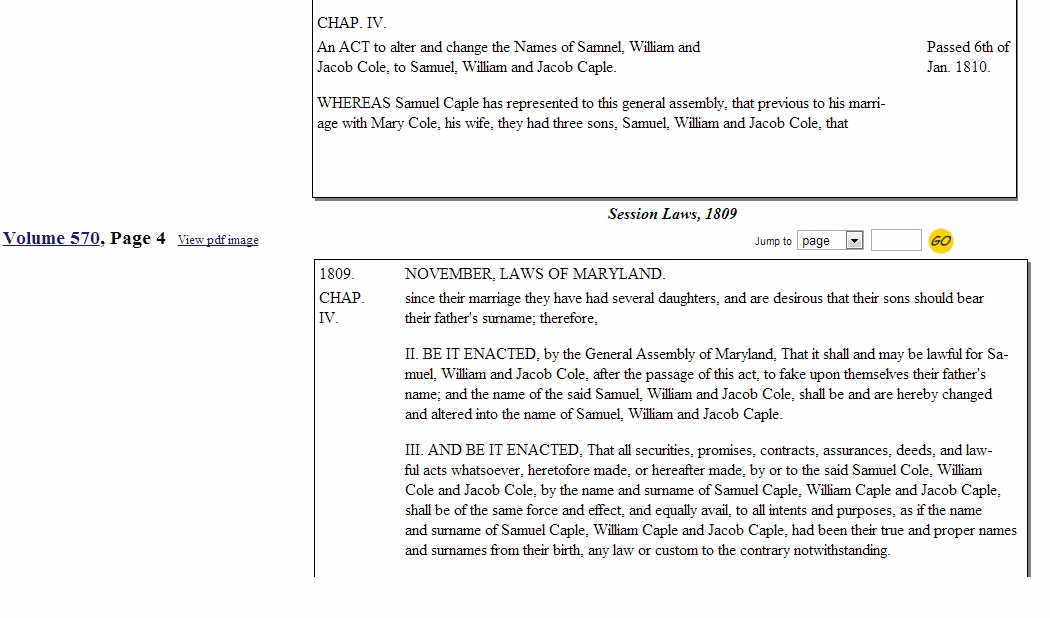 I held the will for Samuel Caples in my hand and struggled to read the writing.  The will was recorded before a probate judge  on May 17, 1869.

I was elated. I had found Jacob’s father. It wasn’t just that his name was listed as a son but also the mention of a son named Nimrod. Nimrod was the name my aunt had found while researching the family in  Monroe, Iowa. The same town where Jacob had lived. The name Rebecca Grimes was also listed which matched what Daisy Lee Grimes had said in her query in that old book in the used book store.

That Jacob and Nimrod had only received one dollar in inheritance suggest they might have had a falling out with their father, however I think it is more likely they had already received their share, perhaps in the sale of the land Jacob had handled for Samuel.

And there was another Samuel mentioned. No wonder my great-grandfather insisted on being called Samuel Hugh. He had an uncle and grandfather sharing his name.

The S on the end of Caple didn’t bother me. I’d learned in the 1800’s people weren’t as concerned about how things were spelled. Even within the land documents Jacob had sold his name appeared with and without the S in the same document.  Samuel Hugh’s pension files had him listed both as Caple and Caples.

Now it was time for me to see if this Ohio, Samuel Caple was connected to the revolutionary war Samuel Caple, from Maryland. Time to start looking at the early census records in  Maryland and connect to those who had more information about the Maryland Caple family via the internet.

It’s been a while since I wrote about the discoveries I made with my Caple family history, so I am including a brief synopsis of what I have written thus far before moving onto the next chapter.

According to my Grandfather, his father Samuel Hugh Caple and had fought in the Civil War. From Samuel’s Civil War pension papers I learned he had been born in Ohio, his parents were Jacob and Sarah Geary Caple.  While in Monroe my aunt had copied some deed we assumed were for Samuel Hugh Caple. But on closer inspection I noticed the the facts didn’t jibe.  The deeds seemed to be for different Samuel, one who lived in Richland county, Ohio. 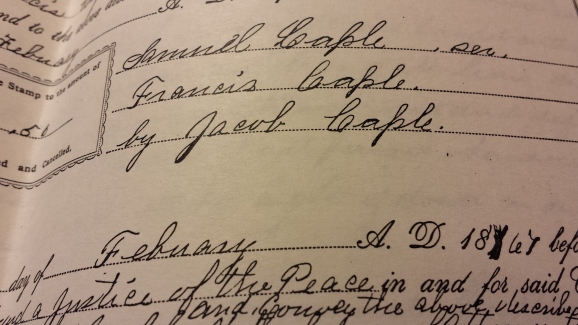 WHO WAS THIS SAMUEL CAPLE?

After discovering the possibilty another Samuel Caple might be connected to the family I paid a visit to the local “Family History Library” run by the LDS church. There I was met by a friendly volunteer who suggested I start my search with the IGI index.

I typed in Samuel Hugh Caple. Up popped his name along with his parent’s Jacob and Sarah Garey Caple, his first wife Polly Sumpter and their children Milo and Minnie. Information I already had.

Next the volunteer guided me to look in the 1860 census for a Jacob Caple in Iowa. Armed with a page number from the census index book, I soon was whirling through microfilm until I came listing I wanted.

With the H. added to Samuel’s name and his age I was sure I had the right family. Ida’s birth in Iowa placed the family’s move to the state to be around 1857.  So far everything matched the info my aunt and Samuel’s pension file gave. It was time to look in Ohio.

Since the children’s births indicated the family was living in Ohio in 1850 the LDS volunteer suggested I next search for Jacob in that census. It didn’t take long to find him:

They had to be my family. But the mystery of the Samuel Caple on the Iowa deeds still remained. If Jacob had POA, there had to be a connection.

Next I searched for a marriage record for Jacob and Sarah in the microfilm copies the library had on file. I found them but the record gave no parents names.

Next she suggested I look for a Samuel Caple in the 1850 census of Richland county. I was thrilled when I found one and he had both a wife named Francis and was old enough to be Jacob’s father.

There was that name Samuel again. Now I had three of them. I recalled my grandfather saying his Dad always insisted he was Samuel Hugh Caple not just Samuel Caple. I wondered, was it because their was more than one Samuel in his family tree?

Next I checked for this Samuel of Richland county in the 1860 census.  Would he still be alive?

I could look for an earlier census for this Samuel Caple and in fact I did find him but before 1850 no spouse or children were listed by name. The 1840 census  would not help me prove or disprove this Samuel was Jacob’s father. For that I will need a will or some other document that might show the names of his children.

That night I composed and sent a letter to Richland county clerk’s office asking if they might have will on file for this Samuel.

In the meantime I decided to follow my aunt’s suggestion and call a cousin, also named Samuel, who lived locally. I had a lovely chat with his wife. Yes, they too,had been trying to discover the origination of the family. Unfortunately she had no new information to add. But she did have a computer.

Now this was 1993 and the internet was new. On a genealogygroup page someone from a Caple family in Maryland had contacted her. They had compared trees but found no matches. However the Maryland person mentioned a Samuel who was the son of the Revolutionary Samuel I’d found in the library book.  According to her, this Samuel had a disagreement with his brother over slavery and had moved north to Ohio.

The story seemed similar to the one my grandfather told. The one where the family had been from the south but sold the plantation and moved North over slavery. Could the Samuel on the deeds and in the Richland county, Ohio be the person my grandfather spoke of?  And if he was, could he be the same Samuel the person from Maryland spoke of?

Hopefully I would have some answers when I heard back from Richland County, Ohio. For now all I could do was wait.

After pouring through my great grandfather Samuel Hugh’s pension file I hungered to know more.  Samuel hadn’t lived in Caple, Oklahoma until he was over the age of 45.  Clearly my Caple family hadn’t begun there.  But where were they from and when did they first come to this country?  (Note: later I would learn Caple was a post office station named for the first post master William Caple Samuel’s brother William.)

I made arrangements to meet with my Aunt Iva. After the usual hugs and greetings she walked me into the dining room where a big cardboard box sat. Inside were an accumulation of old photos and papers my grandfather had saved.  She had never seen Samuel Hugh’s pension papers so we began with those.

She was not surprised that her Grandfather had been living in Monroe, Iowa during the Civil War. In fact she’d traveled to Monroe and Oklahoma.  Unfortunately, she’d found little to add to the story we already knew.  No graves has been found matching Samuel’s family.  However she had found graves for   wives and children of a Nimrod Caple. While we ruminated, on how hard it must have been to lose so many loved ones, we wondered who he was?  Were we related and if so, how?

At the court house she found deeds for Nimrod plus some for a Samuel Caple with Jacob Caple having  power of attorney to sell the property. We assumed the Samuel was his son Samuel Hugh Caple.  At the end of my visit she lent me the deeds to make copies. 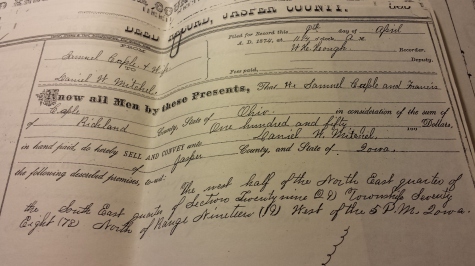 That evening I  sat at  my kitchen table and re-examined the documents. The first deed was for property sold in 1863, the others were for 1867.  Both my aunt and I had assumed Jacob was selling land for his son while he was serving in the Iowa infantry in the civil war. But Samuel was only 18. Would someone so young have property to sell?  And why didn’t he take care of it himself in 1867? Then I noticed something else. The deeds said Samuel lived in in Richland county, Ohio not Jasper county, Iowa. And the wife was named Francis not Polly. And besides Samuel hadn’t married until 1868. The place, names and dates didn’t add up, this Samuel had to be someone else, but who and how were we connected to him?