This story is about Margaret Ragsdale Caple. Although my aunt says she was born in Kentucky all of her records indicate Missouri as her birth place. The family came to live in Puyallup sometime between 1900 and 1904.  The Puyallup house, in this story, burnt down in the late 1930’s. The G.A.R. home mentioned was the Meeker mansion. Today it has been restored back to to the way it was when it was Ezra Meeker’s home and is a museum.

Margaret Ragsdale Caple with her 5 grandchildren in 1923. Standing in back are Robert Caple and Blanche McKay. The girl standing in front is Iva Caple Bailey and the older baby is her brother, Roger Verle Caple. Margaret McKay is on the right.

I was only twelve when my grandma Caple died, but I have many good memories of her.

For the first eight years of my life, grandma lived right next door to us in Puyallup. We all lived on 16th street, south-east, in what was then called Meeker Junction.

The house grandma lived in was a large, two-story, white house with a big bay window in the living room that grandma called the parlor. There was a porch that went almost all the way around the house. This was the home my dad grew up in and the house that was for a short time, my second home.

My grandfather Caple had died in 1920 when I was only two years old. I really couldn’t remember him but his memory seemed to live on in the house too.

Grandma had snappy brown eyes and long beautiful hair when it was combed out she could sit on it. She would let me brush and comb her hair, then she put it up on her head with big, bone pins and pretty combs. To me she was beautiful.

Even though grandma was born in Kentucky, she was of English parentage and she was an avid tea drinker. She and I had many tea parties, complete with Johnny cakes, as she called the little cakes she made. I remember, in particular, the sassafras tea she would make for us.  It tasted so good to me then.

Years later, when I was grown up, I bought some sassafras bark and made some tea, but it didn’t taste the same as grandma’s.

The feather bed she had brought with her from Missouri, in the covered wagon. How I loved to spend the night with grandma and sleep in the big feather bed. In the morning there would be sunken spot where we had slept. She would let me help her fluff and make up the bed again.

When I was about eight, grandma traded the big white house in Puyallup for a house in Orting, which was about ten miles away from Meeker Junction. She was a Civil War veteran’s widow and as such was entitled to commodities. To get the commodities she had to live in Orting where there was a colony of soldier’s widows. There was then, and still is, a soldiers home there.

Once a month the army officials would deliver grandma, coffee, tea, sugar and other staples. To grandma on her small widow’s pension, this was a big help.

I can remember how really upset I was by this move. Grandma traded houses with a lady by the name of Mrs. Zettiker. I didn’t like this lady. She had taken my grandma’s house away from us, or so I thought in my childish mind. I can remember my dad trying to explain to me that it was to grandmas best interest that she make this move.

Mr. Zettiker came and she changed grandma’s house. She put a bathroom in the room that had been my play house. She tore off the big porch that my cousins and I had played on when it rained. All this didn’t make me like her any better. I was glad she never lived in the house. She rented it out and I had several “best” friends there during my growing up years.

I would visit grandma every chance I had, which was pretty often. Dad worked in the logging camp which was above Orting, so he would take me along often, when he went to work, and I would spend the day or week-end with grandma. We had some good times together, grandma and I.

It was the summer before I was twelve that will always live in my memory. Grandma had gotten up early one August morning to water her garden. She left me sleeping in the big feather bed that she and I loved so much. In a short time she was back. She was talking to me but I couldn’t understand her. She lay down on the bed beside me and I knew something was wrong. I don’t even remember getting dressed, but I guess I did. I ran to the neighbors and hysterically told her that something was wrong with my  grandma.

The neighbor helped me call my dad in Puyallup. We had no telephone at home, so I had to call a neighbor who got Daddy to the phone. I was so hysterical by the time Daddy got to the telephone he could hardly understand all that I was trying to tell him. He knew something was wrong with grandma.

By the time my mother and dad got to us, grandma was in a coma. She had a stroke and never regained consciousness.

They moved her to the G.A.R. home in Puyallup. There she died a few days later on August 5th, 1930. She was seventy-two.

She was laid to rest with my grandfather in the Orting Soldiers cemetery on August 8th, which happens to be my dad’s birthday. It seemed to me then, that part of the light had gone out of my world. 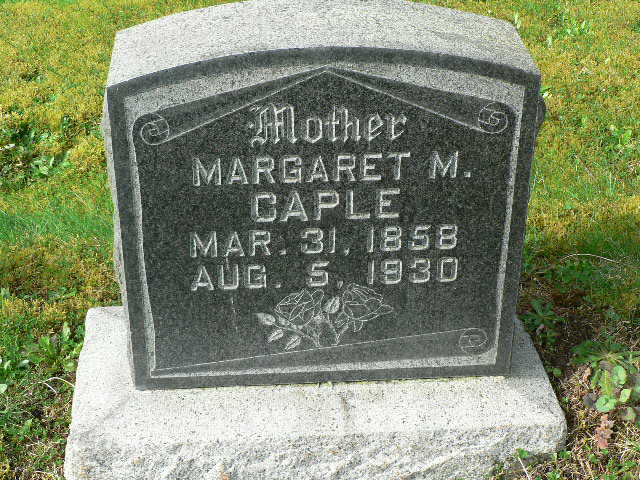