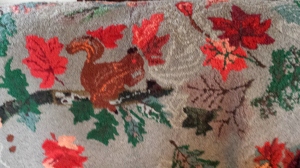 (This story was written by Mother about her most memorable Christmas.  I think she was probably about 7 or 8 when this story took place.)

The oldest member of our family, my brother John, as a young teenager, trapped muskrats on the Milwaukee River which bordered our farm. The fur from these animals provided him with spending money.

Around noon,on the day after Christmas, he walked into the house carrying a very stiff, motionless squirrel. John had returned from checking his trap line and had found the squirrel caught in on of the traps.  Mother said, “He appears to be frozen.  Put him in the box behind the cook stove.  As soon as you’ve changed your soiled clothes and get warm, you can carry him outside.  Later you can carry it to the garbage dump.

Imagine our surprise when sometime later we noticed movement in the box. The squirrel wasn’t dead after all.  It was just stiff from the cold.

Soon the little fellow was up and about, but his back leg was broken. We carried his box to the Christmas tree.  We felt he’d feel more at home under a real live tree. We added some soft clean rags to his nest and fed and watered him.

Finally he became strong enough to leave the box and scamper up and down the Christmas tree.  His movements shook the tree just hard enough to make the ornamental bells tinkle.  Sometimes he’d venture out on to a brand, chattering and scolding us.  That made us literally squeal with delight.  When he tired of tis activity he’d return to his box, curl up and go to sleep.

We never tired of watching him.  All of had high hopes that his leg would heal enough so he could return to the outside world.

We enjoyed him for 3 days.  One morning when we went to check on him we found his little body stiff and lifeless.

We all felt saddened by this turn of events. That little furry fellow had given us so much pleasure and made that Christmas truly memorable. How many children get to have their very own squirrel for Christmas? 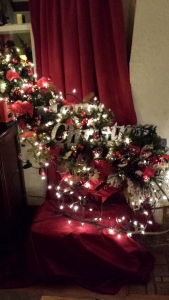 Jeannette Claire Meyer Caple
(These stories were among stories among rough drafts my Mother was writing for s life writing class. Her teacher liked the squirrel story the best and so that was the one she perfected but I like these memories better. Some of these drafts may have had lost parts others had more than one version. I used the one that seemed the most complete. I think these were written in 1987)

Christmas was a time of great anticipation. I believed in Santa Claus much longer than children do today. I lived in an age of such innocence it was easy to be fooled. I had never seen a department store Santa Claus. The only Santa Claus we ever saw was the one that came to the schoolhouse the night of our annual Christmas program.
The Christmas program was the highlight of the school year. A teacher was judged by the way she utilized the talents of all eight grades of children. This was no small feat since she somehow had to incorporate the little children with the middle-sized ones and the big ones. Then there were parents to consider. Hell has no fury like that of a parent who feels his child has been left out. For a month before Christmas vacation, we practiced. We even had a stage curtains that opened and closed. Everyone that was big enough to pull the ropes wanted a turn. I made one feel so responsible. We usually had a Christmas pageant about the birth of the Christ Child. This did not cause a bit of trouble, as everyone in the community was a Christian.
After the program ended, we children would be able to hear sleigh bells in the distance. We knew Santa Claus would soon be coming into the classroom. Santa arrived amid much stomping and hearty ho ho ho’s and always an appropriately red nose – probably from waiting outside in the cold Wisconsin weather for the last of the program to be finished. He was always very rotund. Sometimes when the fattest man in the area who must have weighted over 600 lbs. was Santa, there was no need for pillows. On his back, he carried a burlap sack filled with bags of candy and nuts for all the children at the school.
I remember the time my favorite doll disappeared a few days before Christmas. I couldn’t find her anywhere. I ran crying to my mother saying, “I can’t find my baby doll anywhere!” She consoled me and said, “Don’t worry honey; I think Santa took her because he wants to make her some new clothes.” This explanation totally comforted me and I went about the day happily playing with my other dolls. I trusted Mother and Santa Completely.
On December twenty-fourth, my Dad would set up the deliciously scented balsam tree in a corner of the living room. Our house always had one rule regarding the Christmas tree. It had to be tall enough to touch the ten foot height of the ceiling in the living room. Santa would trim it when he came during the night. Never in the years, my siblings and I believed in Santa, did we ever see our parents trim tree. Even after we were all too old to believe in the kindly old gentleman in the red suits was the tree ever trimmed before the twenty-fourth of December.
The four weeks before Christmas were used to prepare ourselves for the birthday of Christ. It was called the season of Advent in the Catholic Church. The week between Christmas and New Year’s was the time for celebration.
Mother and Dad encouraged a very early bedtime on Christmas Eve. We happily cooperated. After all Santa had so many houses to visit, we had no wish to impede his progress. Soon after snuggling down in bed, I’d hear the tinkle of bells. This phenomenon occurred because my parents were loudly ringing ornamental bells as they hung them on the tree. I imagined Santa was in the living room trimming the tree with that happy thought I’d fall soundly asleep, lest he catch me awake and not leave any gifts.
Early on Christmas morning my parents would shout, “Wake up! Santa has been here!” In a second, we would all be out of bed and running downstairs to the living room. Was there ever a more spine-tingling sight than the Christmas tree, as it stood in all its beauty aglow with the ornaments and tinsel?
Gazing upon the gifts under the tree, I spied a doll. Oh-h-h she was beautiful all dressed in a pink organdy dress, trimmed in lace with a matching bonnet and booties. Her little fat rubber arms stretched towards me. I grabbed her and hugged her tight. It was only then that I realized she was my old baby doll come back to me. This realization did not detract from my happiness in the least. I was just thrilled with her and now she was as pretty as a brand new doll. I know I received other gifts that year but I can’t remember them, so complete was my joy with my precious old baby doll.

Candy on the Tree

Every year Santa hung delicious candy among the ornaments on our huge Christmas tree. After all the presents were opened we children would walk around the tree counting the pieces of candy that hung from the branches. There would be various flavored stick candy chewing gum licorice pipes, chocolate Santa’s, suckers and candy bars. One memorable Christmas Santa added chocolate covered mice that were hung from the branches of the tree by their chocolate-coated rope tails. During the night, the coal furnace over-heated. The house was in no danger of burning, but by the time Dad got the fire banked and under control the house had warmed up to a considerable degree. The chocolate covered mice got very soft and started to sag. Their marshmallow bodies stretched far out from their long tails giving them very ridiculous appearance. We hall had a lot of fun laughing about our now strangely shaped candy mice. But they tasted just as good as ever.
A Christmas tree hung with candy is somewhat like having your very own candy store. Mother allowed us to untie a piece anytime as long as we were considerate of the rest of the family and didn’t pig out by eating more than our fair share. I forgot that admonition one year and ate lots of Hershey bars. Later that evening I became dreadfully sick to my stomach. What a lesson! I never ate another chocolate Hershey bar until I was over thirty years old.

In speaking of her mother’s sewing she wrote…….

One year for Christmas, she gave me a six gored wool skirt that she made out of a huge woman’s coat. I loved it. I was so thin and tiny and it looked well on me. She also made me a pink batiste blouse from anther discarded dress. I especially appreciated this because I know how she labored to do this. She got up in the morning before anyone else arouses to make these things as a surprise gifts for me. I can’t begin to mention the many things she made for me but the outstanding ones were to be my wedding dress and veil and a fur muff and hat.

The next one is about our family Christmas when I was young, mostly the 1950’s,

After Thanksgiving had come and gone in our household, we were beginning to prepare for Christmas. The children were eagerly awaiting the package delivery truck. ( Note – I fondly remembers this. It’s arrival meant the Christmas season had finally arrived).
Each Christmas there was a big box from Grandma and Grandpa Meyer or as the children always called them Grandpa and Grandma Consin. This expression started with the oldest were little children and when we spoke about their grandparents in Wisconsin. Wisconsin was such a mouthful so it was shortened to Consin and from then on until they were well grown-up, they were always known by that moniker.
Their Grandparents did not have much money to spend but everything in the box was made with love and even the smallest child sensed this. At last, the day would arrive when the express left the big Christmas box that was opened up by degrees. The individual gifts were left in the box and were opened on Christmas Eve after we had dinner and the children had their baths. But Grandma always tucked in things to be had immediately. There was always a container of hickory nuts meats usually in a new Tupperware container I could use later in the kitchen. This was grandpa’s contribution. In the fall, he would pick and  crack them.  Mother always tucked in stockings filled with treasures for the girls. Things she knew they would love like pencils, their own tape etc.  These they were allowed to open before Christmas.  And there was always a box of homemade cut out cookies of ginger and anise.  These would be our dessert one night before Christmas.