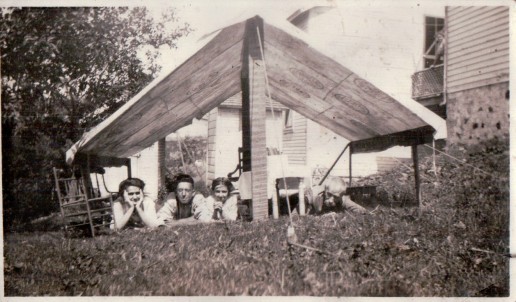 John Meyer and others at is home in Cascade. 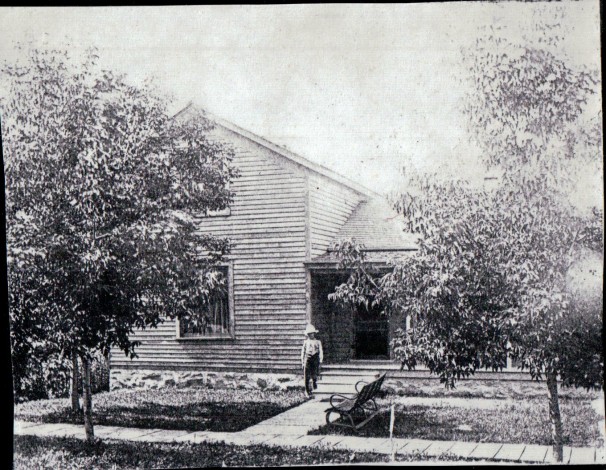 When Johannes’ and Julia Meyer went back to New York state they  took their youngest son Charles back with them. Johannes’ daughter, Catherine (known as Kate) was still in New York.  The remaining 5 Meyer children remained in Wisconsin. Margaret married Phillip Welter and eventually ended up on a farm in Kaukauna, WI.  Anna had married Fredrick Seyforth ( Julia’s son) and moved to a farm in the area of Pepin, Wisconsin. Mary married Wilhelm Demand, a civil )war veteran.  They lived in Sheboygan, WI. The two boys John and George were still unmarried when their father left but also remained in Wisconsin.  George married Sophia Allman and eventually moved to Brown county, South Dakota.  And John, my great grandfather settled in Cascade, Wisconsin where he became a shoemaker.

The 1880 census shows him boarding with August Hafenmeister, also a shoemaker and his wife. In the same census a young woman  by the name of Maria (Mary) Thomsen is living and working as a servant in the town.  The following year these two would marry on July 10th, 1881.

Mary was quite a bit younger than John. She had been born in 1860 in Denmark.  Thus making her almost 16 years younger than he.

They settled into a house in Cascade and soon their first son was born.  They  named him William.  He died about a year later of summer complaint.  He was followed by three more sons, Frank born in in 1884, Geroge H. in 1888 and Arno A. in 1893.

In 1892 John and August Hafenmeister dissolved their partnership and John continued to run the shoe business until 1925 on his own.

The picture below is a photo taken of John Meyer in front of his shoe shop. 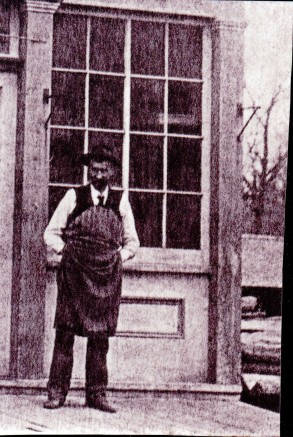 I know very little about their life there in Cascade except through frequent mentions in the Sheboygan Press after 1914 until his death in 1926.  His shoe shops was reported as a popular meeting place for the villagers to congregate to share the happenings and news of the day so he must have been a friendly, outgoing kind of man.

In January 1915 the Shebogan Press reported that John Meyer had remodeled and repainted his store and added electric lighting an improvement the paper suggested others in the village should also do.

The frequent postings in the Sheboygan Press similar to the ones below tell us friends and family were an important part of their life.

“Mr. and Mrs. John Meyer are entertaining Arno Meyer of Madison and George Meyer of Ladysmith and Miss Rose Allman of Dundee.”  (This post is  tells us John and Mary had their sons over along with George’s fiancé Rose Uelmen.  It also tells us George must have moved to Ladysmith before his marriage and that perhaps Rose is teaching school in Dundee.)

March 11, 1915 reported that; “Mrs. Koch and daughter Marion left for their home in Sheboygan on Monday after spending several weeks with their rleatives Mr. and Mrs. John Meyer.”  (Mrs. Koch would have been John’s niece and daughter of his sister Mary Meyer Demand. Although it is only 11 miles between Cascade and Sheboygan the frequency of family members  remaining several days on visits suggest getting to and from the two places was time consuming in the late teens).

In February of 1916 the paper reported: “John Meyer has returned home after he spent several days with his son George in Jersey.” ( This would have been just after George took over the farm there.  His Dad was probably helping him get situated. Rose had given birth to their first son John on Dec. 13th while the couple were visiting George’s parents in Cascade. According to my mother, Jeanette Meyer Caple, he was premature and very small. His grandmother Mary Meyer,  put him in a shoebox and kept him warm by the stove. Mary’s good care during the first few weeks of his life was credited with keeping him alive.)

On October 20, 1916 the paper reported: “Mr and Mrs. John Meyer motored to Jersey and were guests of Mr. and Mr.s George Meyer. (This post also indicates they own a car.)

Still other posts tell of John and Mary going to spend time with the same people in their homes.

On Dec 8th, 1926 the paper reported that Mr. and Mrs. George Meyer and children visited on Sunday at the John Meyer home. Also that Mr. Arno Meyer of Waldo spent Monday at the John Meyer home. These 2 visits were most likely precipitated by a stroke John had suffered at about that time. A week later on Dec 13th he died at the age of 81. His obituary reported he had been in the shoe business for more 60 years and had enjoyed good health up until the stroke that resulted in his death. His funeral was held at the Cascade Lutheran Church and he was buried in St. Paul’s Lutheran cemetery, in Cascade. 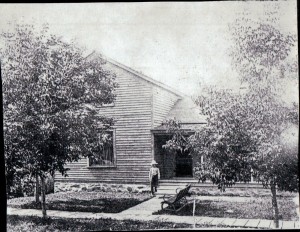 Growing up my family never celebrated old customs or made traditional foods the way many of my friendsdid. We were American, that was good enough.  And it was – except I wanted to know more.

My paternal grandfather told me his family had come from the south. He thought they might have owned a plantation and had moved North because of slavery. But he had no idea where or when they had originally came here.

My mother, on the other hand, knew her grandparents had come to the U.S. as children. She thought they’d come from Prussia to avoid it’s warring ways. Why they’d chosen to live in Wisconsin or if they’d ever lived elsewhere in the U.S she couldn’t say.

She’d heard the Meyer’s were somehow connected to the Roosevelt’s of NY and her Dad had two cousins who lived in upper NY by the name of Edith and Pierre. She thought they might be rich as they wintered in Florida. Later she remembered that her grandpa Meyer had come from Alsace Lorraine and his wife from Denmark. And there had a been some kind of remarriage in the family with a his, hers and ours sort of family. She thought it was probably John’s parents and that one of them had returned to live in Europe. Two things she was sure of, her grandfather had been a shoemaker and he and his wife, Mary Thomsen had raised their family in Cascade.

While she didn’t know much about her grandparents my mother did know lot more about her Meyer uncles. She knew the oldest had been born inn 1883 and a still older son had died as an infant.That meant John Meyer would have had to have married no later than 1880-81. My first search was to see if I could find him in the 1880 census.

Today I could pull up the record quickly using my computer but In the 1990’s I had to find both the Wisconsin 1880 census and it’s index in a library. Lucky for me my local branch had both. Scrolling through the microfilm I found a John Meyer,living in Cascade, single, age 35, boarding with a August Hafemeister. Both men were shoemakers and John had been born in France. Since Alsace was part of France, he sounded like my man. Better yet, a few entries down was a Mary Thomsen, age 20, a servant for the hotel keeper. Schleswig, a part of southern Denmark, was listed as her place of birth. Chances were she was soon to marry the shoemaker. 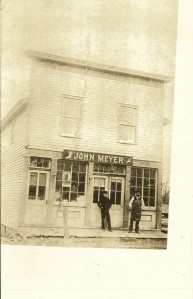 I felt sure I had the right people but I needed more proof. Plus, I still wanted to know when had they come to Cascade and who were their parents? Had they come alone as teens or with families?  I decided to write to the Sheboygan county genealogy society and see if someone could find their marriage record.

(The below photo if beside in the yard of John Meyer. He is the gentleman on the far right) 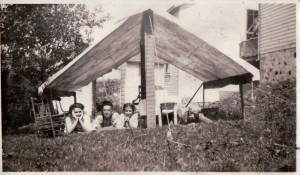 While I waited for an answer I shared the information I’d found with my mother.  She in turn unearthed a scrapbook her mother had kept. It was a mish mash of stuff, most having nothing to do with the family, but in the very back she had written down the names of the Thomsen side of the family. Now I had Mary’s parents and siblings names and birthdates. No town name was given but she did say they had come from Schleswig a part of Denmark.

Meanwhile I went back to the 1880 census for Cascade and found Mary’s parents Thomas and Anna Thomsen. He was a wheelwright. Not long afterwards I received the marriage record in the mail. A John Meyer, son of Johannes Meyer and Marguerite Sontag, had married an Anna Mary Thomsen of Cascade. John’s birthplace was listed as Airshiem, Alsace. Also enclosed was a newspaper clipping from their 25th wedding anniversary and an ad for John’s shoe shop.

The 1890 census had been lost in a fire so the next census I could consult was 1900. It would, if I could find them, tell me how long they’d lived in this country. I found John and Mary still in Cascade along with their three sons. John’s arrival was listed as 1848 and Mary, or Anna M. as the census listed her, as coming in 1874. Both had their place of origination shown as Germany but since both Alsace and Schleswig were under German jurisdiction in 1900 it wasn’t unexpected. Neither the 1880 census or the 1900 census had any indication of John’s family living nearby. If he had arrived in 1848 he’d only have been 4 or 5 years old. Where was his family? What had happened to them?  And how did the two NY cousins fit in? To learn I was going to have to dig farther back into time.  The question was where?