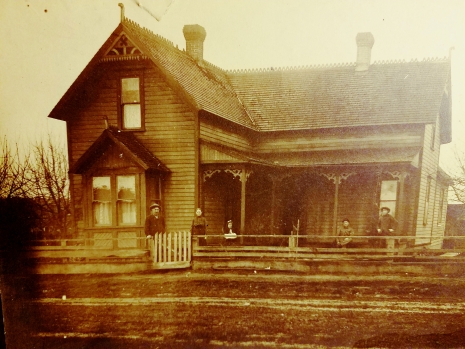 The Samuel Caple home, Puyallup, WA, 1905. The woman standing is Margaret, the seated gentleman, Samuel. The little girl is probably their youngest child, Lida. The young man standing on the right might be a son. The man on the left is unknown.

Family History writing prompt 6 – choose an ancestor and a census where they appear, throw a block party for everyone on the page. What are they celebrating, doing and talking about?

Of the Twelve families listed, five rented their homes, seven owned and of those seven, three had mortgages. Nine families were listed as living in houses and three families on farms. Much to surprise my great grandparents were one of those with a farm. Proving the adage that one should always look again at documents you think you have already gleaned all the information from.

Occupations varied, with one full-time farmer, one express business, three loggers, two sawmill workers, two retail workers, one employed at the box factory, one carpenter, and one rail road worker.

Those interested in social history should google the July 4th heavy-weight fight between Jack Johnson and James Jefferies, mentioned in this story. The fight sparked both riots and celebrations nation-wide.

Margaret pushed open the screen door and stepped onto the porch. The sight of Mt. Rainer, silhouetted majestically against the blue sky, made her pause. What a splendid night for a 4th of July supper.

Laughter erupted from the far end of the porch where Naomi Bailey, the Alger girls and her daughter Lida were having a good time playing a game of jacks.

It gladdened her heart to see Lida with chums. Living in a sod house in Oklahoma had been lonely. Leaving had been the right decision, it was nice having neighbors and friends close at hand.

Her eyes scanned the street, under the trees next door, the men had set up tables and chairs for supper. Now the women were busy filling the tables with platters of sliced ham, fried chicken, homemade breads, jams and jellies, deviled eggs and salads. Plates of cakes, cookie and pies and berries fresh from her son Roy’s berry patch, filled the dessert table along with pitchers of lemonade and iced tea to quench their thirst.

Grunts and groans arose from the side of the house where her three sons, home from the logging camps, were supervising the nine year-old Bailey twins, Harold and Howard, as they cranked the churn on the ice cream maker.

“Come on you can do it,” urged her son Roy. “A little more muscle work and you’ll be done.

At 26, 24 and 20 her three dark-haired sons were a good-looking trio. She’d noticed the way the girls looked at them. Soon someone would steal their hearts.

She reached up and brushed a tear from her eye, her thoughts drifting to her missing children. Sammy should be standing there with the three of them. Had it really been 10 years since they’d lost him. It had been even longer since Ida and baby Bertle had passed.

Guffaws from down the street interrupted her sad thoughts. The older men of the neighborhood were gathered around Mr. Bryan’s shiny, black Model T. Ever since he come home with that car, her Sam could speak of little else. He’d even begun to talk of getting a truck of his own. She shook her head, such nonsense.

The rest of he men were gathered by their barn, deep in conversation. No doubt discussing today’s heavy-weight fight between Johnson and Jefferies. Fights – another piece of nonsense.

Stepping off the porch Margaret strode toward the food tables to add her yeast rolls to the tables.

No doubt about it, President Taft would be proud of how her neighborhood had answered the call for a safe and sane 4th. She just hoped it remained that way later when it was time to shoot the fireworks off at Spinning school.